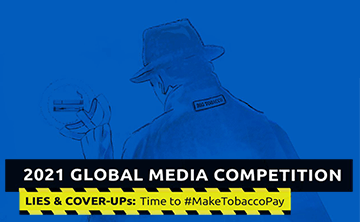 The 2021 Global Media Competition organised by the Global Center for Good Governance in Tobacco Control (GGTC), a partner of STOP, a global tobacco industry...

Contest for the New logo of Gabrovo City of Crafts and Folk Art now is over!


CALL FOR ENTRIES: Gabrovo Municipality organizes a public logo competition of Gabrovo, as Creative City of Crafts and Folk Art ivites artists and graphic designers from all over the country and abroad to participate.


New public logo competition recently announced, organised by Gabrovo Municipality - an Creative City of Crafts and Folk Art - invites all artists and graphic designers from all over the country and abroad to take a part.

Gabrovo is a city with an impressive history, a true guardian of traditional crafts and folk art, with specific genuine humour creatively adapt to modern times with a strong vibe for future development. These factors are fundamental for the development of the city through arts and culture. Local community respect and preserve the crafts as a cultural value and recognizes their potential for development in the fields of culture, economic and education. In 2017, Gabrovo joined the network of creative cities of UNESCO as City of Crafts and Folk Art. The network was established in 2004 for supporting the cooperation between cities that have identified creativity as a strategic factor for sustainable urban development. At present, the network consist 180 cities from 72 countries that work together to put creativity and creative industries at the center of their local development plans and to cooperate actively at the international level.

The graphic symbol should represent Gabrovo as a favorable place for creativity, entrepreneurship and innovation. It must be recognizable, influential, original and flexible in its use. The new sign will be used in future communication campaigns and presentations, as part of the regulated use of UNESCO or as a separate graphic sign to identify Gabrovo as “City of Crafts, Folk Art and Creative Industries”.

Authors should represent their own projects, if in co-authorship, all co-authors should be mentioned. Each author may submit up to 3 projects. All projects must be created specifically for this contest and have not participated in other competitions before. The projects should not replicate existing logos and should not been published in any form before.

To enter the contest the projects must meet the following technical requirements:

• Each project must be prepared in two variants with four possible interpretations. They are represent in the attached template on the official web site.
• The basic design option is the self-use of the logo, in full color with Latin alphabet. Its black and white version with Cyrillic alphabet.
• All proposed designs must necessarily have the inscription Gabrovo (first row) and City of Crafts and Folk Art (second or more rows) in Latin or Габрово (first row) and Град на занаятите и народните изкуства (second or more rows), which are an integral part of the design of the future reserved sign
• There are no restrictions how the inscription will be presented, each participant may choose depending on the project, whether to use only capitalization, only regular (small) letters or to combine them
• Each project must use as a basis the template Gabrovo-Logo-Template.png and rendered in a PNG or JPG file with a base of 1,600 pixels and a height of 1,100 pixels
.
• Each project must have a text description of the concept in free form up to 1,200 characters

There is no entry fee to participate!

This competition is open to Bulgarian and foreign individuals and legal entities and their associations. Individuals must be at least 18 years old on the date of submission the application.